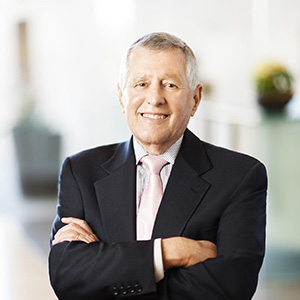 Dr. Crooke is founder, chairman, and chief executive officer of Ionis Pharmaceuticals (the company formerly known as Isis Pharmaceuticals). During his tenure at Ionis, he has led the scientific development of a new platform for drug discovery, antisense technology, and engineered the creation of one of the largest and more advanced development pipelines in the biotechnology industry. Currently, Ionis has more than 35 drugs in development including several drugs in Phase 3 and a larger number in Phase 2 clinical trials.

Ionis has reported broad progress in advancing the technology and has achieved commercialization of the first two antisense drugs to reach the market, Vitravene and KYNAMRO® . KYNAMRO, recently approved, is the first systemically administered antisense drug to be approved and the first to be approved for lifelong treatment of a chronic disease, Homozygous Familial Hypercholesterolemia.

Early in Dr. Crooke’s career, he led the creation of the first broad anticancer program in the industry at Bristol-Myers, bringing nine anticancer drugs to the market in the first five years of his career. He then assumed responsibility for worldwide R&D at SmithKline Beckman. While at SmithKline, he led the restructuring of the R&D organization and was involved in commercializing numerous new drugs in broad therapeutic areas. He also coordinated all research activities including, instruments and diagnostics. During his career, he has led the development of more than 20 marketed drugs.

Dr. Crooke has also supported the creation and growth of a number of companies based on Ionis technology including Alnylam, Regulus, Ibis, OncoGenex, ATL, and others. He led the creation of a large portfolio of strategic relationships, has served on numerous boards and is currently a member of the Board of Directors of BIO.

Dr. Crooke has received a number of awards. He was named Man of the Year by The Crohn’s Disease Society; he received the SMA Breakthrough Award and he achieved the Lifetime Achievement Award from Scrip. He was named by Nature Biotechnology as one of the most influential individuals in biotechnology and has received the Director of the Year Award from the Corporate Directors Forum, the Distinguished Scientist Award from the American Chemical Society (San Diego Chapter), the Helix Award, for the most important innovation in biotechnology by the Biotechnology Industry Organization, BIO, Stony Brook University and the Center for Biotechnology, and the Ernst and Young and Entrepreneur Award of the Year Award as well as Distinguished Alumnus at Baylor College of Medicine and at Butler University.

Dr. Crooke received his M.D. and Ph.D. degrees and house staff training at Baylor College of Medicine and has been an active scientist throughout his career. He has led the creation of antisense technology broadly with a focused scientific interest in understanding the molecular mechanisms of antisense drugs. He has published more than 450 scientific publications, edited more than 20 books, and has numerous patents.

Dr. Crooke has also been a medical educator and was a professor of pharmacology at Baylor College of Medicine and at the University of Pennsylvania Medical School. He has served as an adjunct professor at UCSD School of Medicine and SDSU.