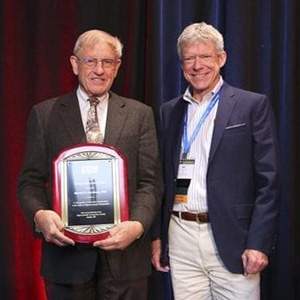 Marvin H. Caruthers is a Distinguished Professor of Biochemistry and Chemistry at the University of Colorado, Boulder. A Guggenheim Fellow, Dr. Caruthers received his B.S. in Chemistry from Iowa State University, his Ph.D. in Biochemistry from Northwestern University, and completed his post-doctoral studies with H. G. Khorana at The University of Wisconsin and MIT.Professor Caruthers interests include nucleic acids chemistry and biochemistry. Approximately 30 years ago, the methodologies that are used today for chemically synthesizing DNA were developed in his laboratory and incorporated into so-called gene machines for the purpose ofsynthesizing DNA used by biochemists, biologists, and molecular biologists for many research applications. More recently his laboratory has developed methods for RNA chemical synthesis and for the synthesis of DNA/RNA on chips. His laboratory has also pioneered the synthesis of many new nucleic acid analogs that have found applications in the nucleic acid diagnostic and therapeutic areas.He is the recipient of several academic and research awards including The Elliott Cresson Medal from the Franklin Institute, The National Academy of Sciences Award for Chemistry in Service to Society, The Prelog Medal in Recognition of Pioneering Work on the Chemical Synthesis of DNA, The Economists Award in Biotechnology for His Contributions in Automating the Synthesis of DNA, and The US National Medal of Science for 2006, the nation’s highest distinction honoring scientific achievement. He is also the recipient of The National Academy of Science Award in the Chemical Sciences, The American Chemical Society Award for Creative Invention, and The Frantisek Sorm Medal, The Academy of Sciences of the Czech Republic.Dr. Caruthers is an elected member of The US National Academy of Sciences, The American Academy of Arts &Sciences and a Corresponding Member of the German Academy of Science Gottingen. One of the co-founders of Amgen and Applied Biosystems, Dr. Caruthersremains active in the Biotechnology arena – most recently as a co-founder of Array BioPharmaand miRagen Therapeutics.