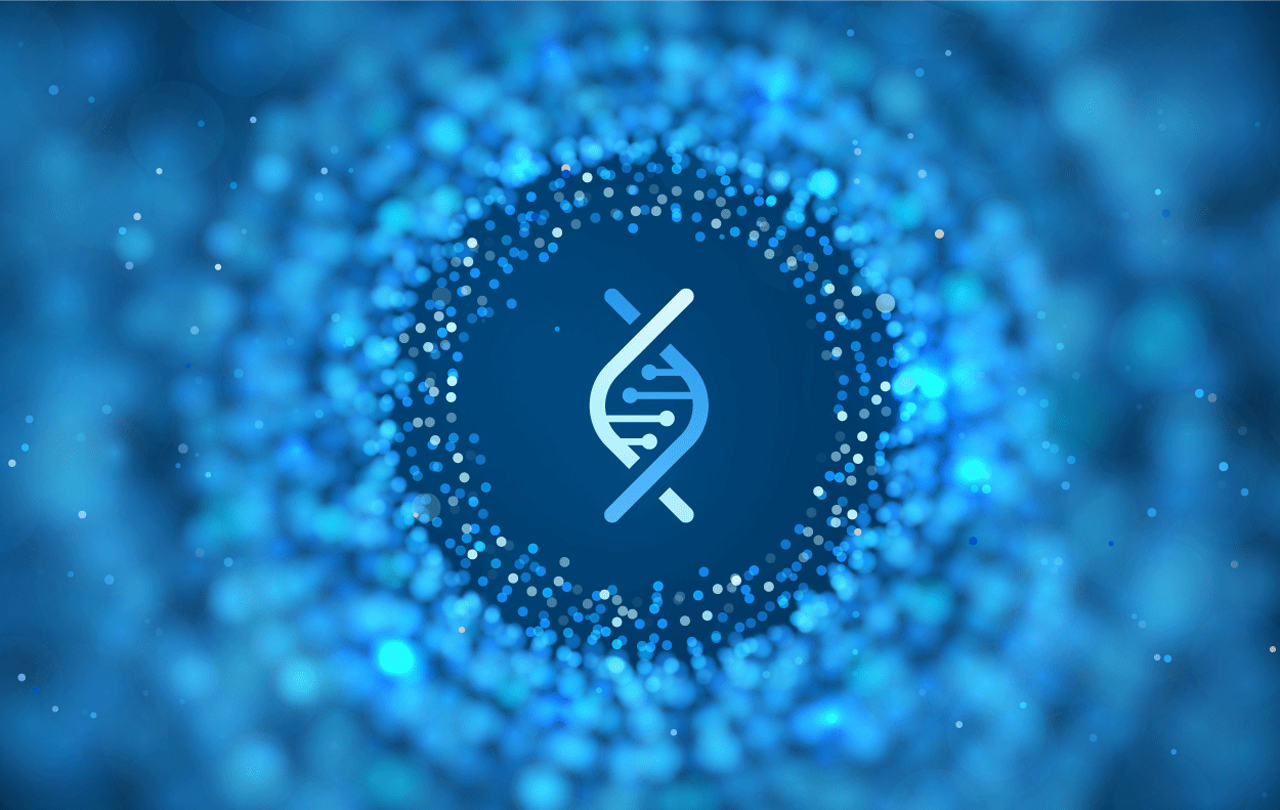 Footnote from title: modified slightly from “A brief history of oligonucleotide therapeutics” in the Timmerman Report, copyright 2022, and reprinted with permission.

A Brief History of Oligonucleotide Therapeutics

About 50 years ago, several scientists independently conceived of the idea of blocking gene expression with synthetic DNA or RNA “antisense” oligonucleotides (ASO) designed to bind specifically to complementary “sense” mRNA based on the simple rules of Watson-Crick hybridization.

The idea of treating diseases by targeting disease-associated RNA was revolutionary. At the time, all existing drugs were small molecules that targeted proteins. In vitro experimental validation of the antisense concept was extremely difficult: it took an unlucky grad student or postdoc months to synthesize enough antisense oligonucleotides for a single experiment and then the oligonucleotides were rapidly degraded by nucleases.

The birth of antisense

During the 1980s new nuclease-resistant oligonucleotide chemistries were pioneered and the development of automated DNA synthesizers made it possible to envision antisense oligonucleotide therapeutics as a revolutionary form of “rational drug design” that could transform drug development based on the simple rules of Watson-Crick hybridization. Publications began to appear in top scientific journals reporting the apparently successful use of ASOs for experimental applications, and then in vivo for treatment of diseases. Academic and investor excitement in the nascent field exploded, leading to the foundation of multiple different antisense companies, starting in 1980 with AntiVirals (now Sarepta), and continuing with Hybridon (now Idera), Oligogen (later Gilead), Isis (now Ionis), and Genta (now defunct).

As a young postdoc at the National Institutes of Health during that time, I became very interested in the approach and the strong biologic effects of some antisense oligonucleotides.

Exuberance is replaced by skepticism – can the dream of antisense succeed?

Antisense technology turned out to be very difficult to develop in practice: functional uptake into cells was extremely limited. Inflammatory and other off-target effects often dominated over detectable antisense effects. Many early positive reports of antisense efficacy turned out to be irreproducible or artifacts due to immune stimulation and other protein interactions: some of the greatest scientific advocates for the field became public skeptics.

Soon after its initial public offering in 1992, Gilead abandoned plans to develop antisense technology and switched to pursuing nucleotide therapeutics – a strategy that succeeded spectacularly. The early efforts at clinical development of more than a dozen antisense oligonucleotide drug candidates yielded a single FDA approval in 1998 fomiversen, marketed as Vitravene for treatment of cytomegalovirus retinitis in immunocompromised patients. That drug was not only a commercial failure, but it did not even appear on further investigation to function via an ASO mechanism of action. The promising concept was floundering, and although those of us in the field during those years did not yet know it, the next ASO approval would not come until 2013 with mipomersen (Kynamro) for homozygous familial hypercholesterolemia. Mipomersen’s approval would be a scientific landmark for the field, providing critical proof of concept for the field and establishing that weekly ASO dosing could provide therapeutic benefit to patients. Unfortunately, poor tolerability and commercial competition resulted in that drug also failing in the marketplace.

Against that backdrop of unfulfilled potential, 20 years ago a group of scientists from academia and industry organized a scientific retreat to discuss the state of the technology and consider how to overcome the hurdles. One of the ideas that came out of that meeting was to establish a society with the mission “to foster academia and industry-based research and development of oligonucleotide therapeutics”.

Since its inception, this Oligonucleotide Therapeutics Society (OTS) has worked intentionally to bring together leading industry and academic scientists from around the world to openly share non-competitive information with each other through an annual scientific meeting and the society journal, Nucleic Acid Therapeutics. We prioritized bringing new students into the field by providing travel grants for grad students or postdocs to attend the annual meeting and present their data to a diverse community of experts. Awards were given to students and established scientists for outstanding work. Leading scientists in the field provided webinars on various topics as a community resource. Last week in Phoenix the OTS celebrated the 20th annual meeting. See this 6-minute video on progress in the field, which includes comments from many of the OTS founders.

From failure to success for ASOs

In the last two decades three critical issues that had limited efficacy have been overcome: 1) the development of new ASO chemistries has greatly enhanced hybridization affinity; 2) new ASO designs have improved efficacy (gapmer designs enable RNA cleavage, and steric blocking designs enabled modulation of RNA splicing and protein binding); and 3) functional uptake of ASO into liver cells was increased ~10X by the conjugation to “GalNAc”, a sugar ligand for a hepatocyte receptor.

In 2016 two steric blocking ASOs showed safety and efficacy in life threatening diseases and were approved — Biogen and Ionis’ nusinersen (Spinraza) for spinal muscular atrophy (SMA) and Sarepta Therapeutics’ eteplirsen (Exondys 51) for Duchenne Muscular Dystrophy and were commercial successes. Nusinersen’s spectacular efficacy and duration of action in treating SMA with every 4 month dosing (after loading doses) exceeded expectations and finally proved the value of antisense oligonucleotide therapies beyond any reasonable doubt. The controversial approval of eteplirsen also helped to advance the field, but its clinical benefit was modest.

By 2011, the pipeline of siRNAs in clinical development included 23 compounds. Skeptics (including me) pointed out that if developing single-stranded ASO was hard, then developing double stranded siRNA would surely be even more difficult. Indeed, Merck’s acquisition of Sirna did not pay off (in 2014 the assets were sold to Alnylam for $175 million) and other pharmas also wrote off early investments in siRNA. Only one of the early siRNAs in clinical development would be approved – Alnylam’s patisiran (Onpattro) for the treatment of transthyretin-mediated amyloidosis. That milestone was finally reached in 2018. The obstacles to broader development loomed larger than the remote possibility of success. Behind the scenes, siRNA chemistry was being steadily improved by the development of GalNAc conjugates and by optimizing siRNA designs using the deep toolbox of oligonucleotide chemistry from the ASO field. The concept of delivering ASO using GalNAc had been considered by ASO companies very early on, and scientists at Alnylam productively pursued this, synthesizing and testing a variety of GalNAc conjugate designs that eventually succeeded spectacularly, and were then adopted by the ASO field. The siRNA duplex design was optimized too: scientists at Alnylam and other companies made thousands of molecules incorporating every modification available in the nucleic acid toolbox, and made new modifications as well, evolving new designs where every single position in the guide strand had at least one modification. At the start of this effort, no one knew whether it was possible for the siRNA duration of activity to match that of ASO, with weekly dosing, let alone to exceed it. The outcome of this siRNA optimization was astonishing to me: the siRNA duration of action has increased to six months after a single subcutaneous dose in humans. It remains to be seen whether ASO designs also can be improved to match (or surpass?) this duration, combined with an excellent safety profile, but both approaches have surpassed initial expectations.

The tendency of ASOs to interact with proteins was a major challenge for ASO applications, but provided an opportunity for drug development that was exploited with the emergence of a new approach, aptamers, leading to the 2004 approval of the first aptamer drug, pegaptanib (Macugen), for treatment of age-related macular degeneration. The discovery that unmethylated CpG dinucleotides stimulated innate immunity via Toll-like receptor 9 (TLR9) led to the approval of two vaccines incorporating CpG DNA adjuvants, (Heplisav-B) and (NuThrax), in 2017 and 2019 respectively. Regeneron’s recent acquisition of my former company, Checkmate Pharmaceuticals, was driven by encouraging clinical data using immune stimulatory CpG-A DNA to treat patients with advanced melanoma where other treatments had failed.

The current state and the future of oligonucleotide therapeutics development

Important lessons learned from early failures have now made it possible to design ASO and siRNA molecules with a much higher confidence in their likely safety and efficacy for preclinical and clinical development. This process starts with sequence selection and the placement of chemical modifications from a tool chest that now includes dozens of options for backbones and modified bases, and ever-expanding delivery modalities.

These advances have created a ratcheting effect in which it has become possible to go from target selection to development candidate and clinical success in less and less time. In the last four years, ten oligonucleotide therapeutics have been approved –patisiran, inotersen, givosiran, golodirsen, volanesorsen, lumasiran, inclisiran, viltolarsen, casimersen, and vutrisiran. The COVID pandemic has been controlled in large part by the spectacular efficacy of mRNA vaccines (we in the OTS consider mRNA vaccines and other mRNA therapies to be long oligonucleotides).

The potential for further acceleration in ASO therapeutic development was vividly illustrated when an academic group with no prior experience in ASO development harnessed the tools to There are believed to be many thousands of patients who could benefit from customized ASO. The OTS has provided a Briefing Document addressing what we believe are some key issues for this new field of “N-of-1+” ASO therapeutics and the FDA has released a draft guidance document for developing these individualized medicines to meet the huge interest from the rare disease community. A non-profit foundation, n-Lorem, announced at the OTS that it is now developing customized ASO for over 70 patients.

After billions of investments and decades of hard work by thousands of scientists, the field of oligonucleotide therapeutics has started to deliver on the early promise. The prospects for the future seem bright. Huge challenges remain, including improving delivery outside of the liver and CNS: in recent years new companies have been funded with innovative approaches to these challenges, and some have produced encouraging early data. New chemistries continue to be developed with improved pharmacokinetic properties, and could be transformational.

A remarkable recent trend in oligonucleotide therapeutics has been the explosion in discovery of new mechanisms of action for modulating gene expression up or down, and the acceleration of their clinical development. It has been less than a decade since Editas Medicine, Intellia Therapeutics, and other biotechs were established to develop the new technology of CRISPR. Enabled in large part by the nucleic acid chemistries and lipid nanoparticle delivery systems that had been developed to support earlier generations of oligonucleotide therapeutics, gene editing companies already have reported positive clinical data: a high point of the OTS meeting for me was Laura Sepp-Lorenzino’s presentation of Intellia’s clinical data showing >90% reduction in expression of several targets in humans! New ideas such as DNA and RNA base editing, increasing RNA expression by preventing nonsense mediated decay, tRNA therapeutics, and trans-splicing therapies are being rapidly advanced from concept to development because they can build on prior advances in oligonucleotide design, chemistry, and delivery. There are many obstacles and challenges to overcome in commercializing these ideas and not all will succeed, but the rate of progress overall is clearly accelerating. To learn more let’s all catch up at next year’s OTS meeting in Barcelona, October 22-25, 2023! 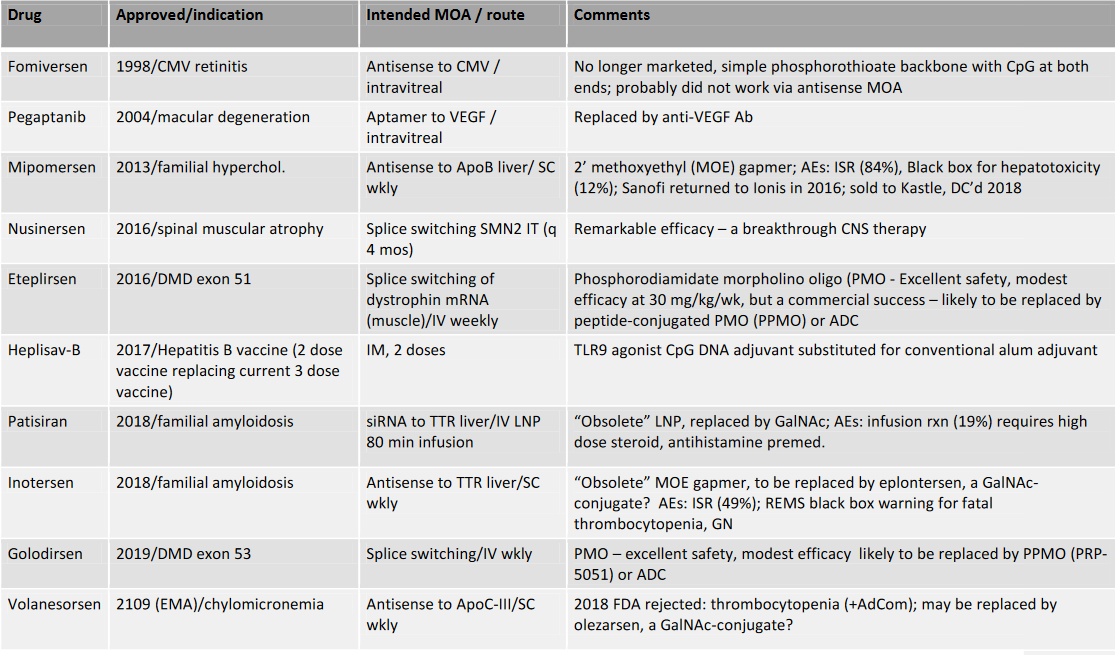