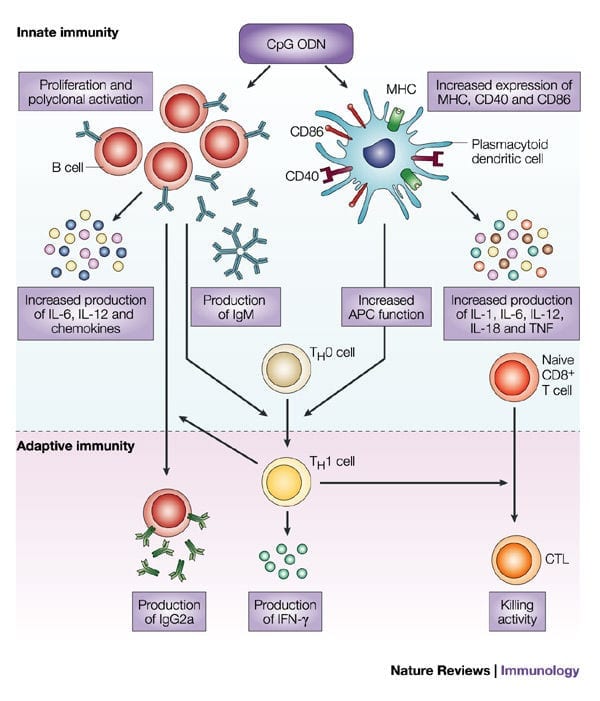 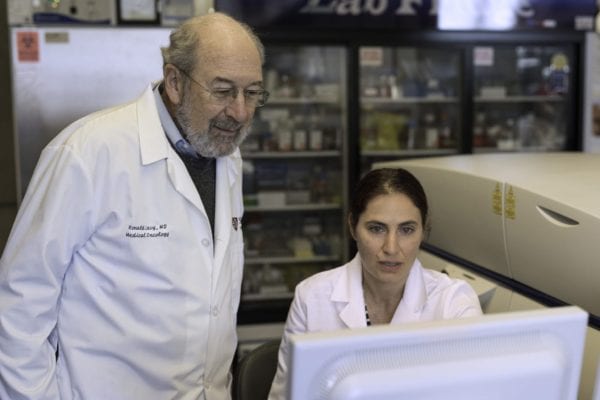 Sagiv-Barfi and colleagues from Stanford University now show that CpG oligonucleotide (Dynavax’s SD-101; 50 µg) injection in a syngeneic A20 lymphoma mouse model or exposure of lymphoma patient tumour samples to CpG oligonucleotides induce expression of OX40 (CD134) but not PD1 or CTLA4 in T cells. The OX40 upregulation was mediated by myeloid-derived cells via interleukin-12 (IL-12), interferon-γ (IFNγ), and TNFα but not IL-2, IL-4, IL-10 or granulocyte-macrophage colony-stimulating factor (GM-CSF).

Addition of an anti-OX40 antibody (8 µg) potentiated the effect of CpG treatment and led to complete and long-lasting eradication (100 days) of both the treated and a distal tumour in the A20 mouse model. In 3 out of 90 treated mice tumours re-occurred at the distal site, but these lesions were susceptible to repeat treatment. Neither the TLR7/8 agonist R848/OX40 antibody combination nor CpG oligonucleotide combined with PD-1 or PD-L1 antibodies achieved similar efficacy.
The CpG/anti-OX40 combo was also highly effective in mouse models of breast carcinoma (including the MMTV-PyVT model with spontaneously occurring mammary ductal carcinomas), colon cancer and melanoma. Treated mice were immune to re-challenge with the same tumour cells but not antigenically distinct ones.

Sagiv-Barfi and colleagues then demonstrate that the systemic antitumor response was triggered by a local immune response at the injection site and not due to diffusion of the reagents to distal sites. This immune response was mediated by a combination of NK cell activation, inhibition but not depletion of regulatory T cells and activation of effector T cells.

Since TLR9 is expressed in different immune cells in mice and humans, additional studies are required to determine whether these impressive results will translate into humans. The authors have started a phase I trial for treatment of low-grade B-Cell Non-Hodgkin lymphomas to investigate this (NCT03410901).

Low dose local administration of the CpG/anti-Ox40 combination could be a rapid and inexpensive alternative to systemic checkpoint inhibition, cancer vaccines and CAR T-cell therapy that would avoid difficult-to-handle side effects, high-cost and lengthy preparation or treatment times.