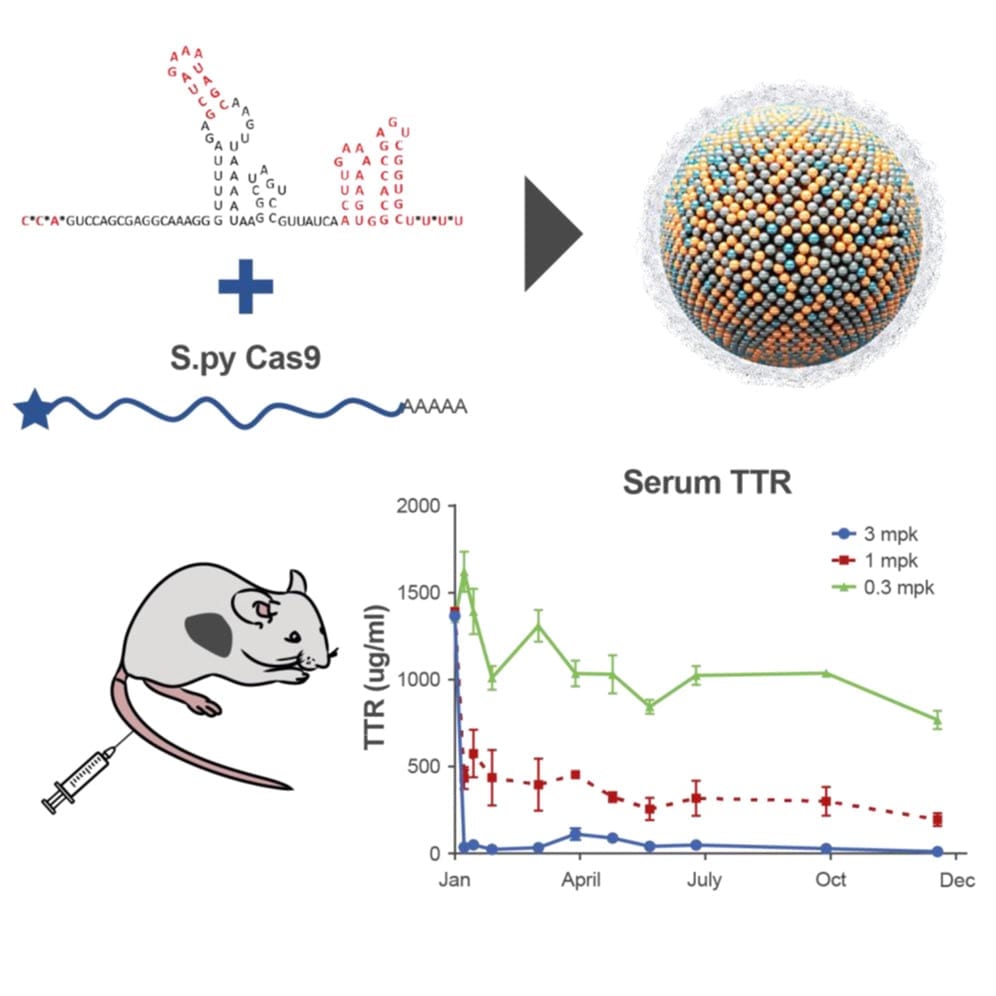 Genome editing using CRISPR/Cas9 holds tremendous promise for the treatment of genetic diseases. However, safe and effective in vivo delivery of the CRISPR/Cas9 components has remained a challenge. Here, Finn and colleagues from Intellia Therapeutics show that a biodegradable lipid nanoparticle (LNP)-based CRISPR/Cas9 delivery system achieved >97% reduction in serum transthyretin (Ttr) levels that persisted for 12 months following a single administration in mice and rats.

See this video on how CRISPR works for more detail:

The authors demonstrate that LNP-INT01 co-formulated with both S. pyogenes Cas9 mRNA and single guide RNA (sgRNA) containing three terminal PS and 2′-OMe modifications at each end resulted in significantly more gene editing (up to 60% depending on the guide target sequence) than LNPs holding unmodified sgRNA. Additional 2′-OMe nucleotides in the upper stem and GAAA loop as well as the two 3′ hairpins of the sgRNA significantly increased potency compared to the end-modified sgRNA.

In contrast to some LNPs which can lead to lipid accumulation in the liver, LNP-INT01 showed rapid clearance of the biodegradable lipid component from CD-1 mouse liver. As intended for limiting gene editing and off-target editing, the Cas9 mRNA and sgRNA were transiently expressed with Cas9 protein peak concentrations at 48 hours in the liver of these mice. Editing levels reached a plateau at 96 hours while systemic Ttr levels dropped starting 72 hours after injection of 2 mg/kg LNP-INT01. At 3 mg/kg, ~70% editing in liver biopsies resulted in >97% reduction in systemic Ttr. Comparable results were achieved in Sprague Dawley rats albeit at a slightly higher dose of 5 mg/kg. Editing and reduced Ttr levels in the mice remained stable for 12 months following a single injection which is very encouraging for therapeutic utility. However, low levels of Ttr editing were observed in non-target tissues such as kidney and spleen. Repeated administration of lower weekly or monthly doses resulted in cumulative editing efficiencies.

The treatment appeared safe and well tolerated in both mice and Sprague Dawley rats.

These results were first presented at the 2017 OTS Annual meeting in Bordeaux ) and show significant progress in overcoming the delivery hurdle for therapeutic CRISPR gene editing. We await non-human primate data with bated breath!