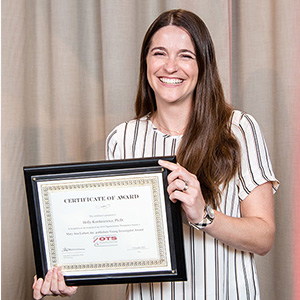 Biography: Dr. Holly Kordasiewicz is an Executive Director in the Neuroscience Drug Discovery Departments at Ionis Pharmaceuticals. Holly heads a team focused on identifying antisense oligonucleotide therapeutics for neurodegenerative diseases, including drugs now in clinical trials for ALS, Alzheimer’s disease, Parkinson’s disease and Huntington’s disease. Holly joined Ionis 8 years ago after working on the preclinical validation for Ionis’ Huntington’s disease program as a post-doctoral fellow in the laboratory of Dr. Don Cleveland at UCSD. Holly began her work on dominantly inherited polyglutamine diseases at the University of Minnesota, where she received her Ph.D. in Neuroscience in 2006.