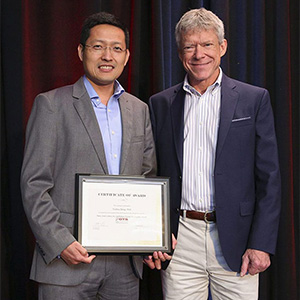 Biography: Yizhou Dong is an Associate Professor ofCollege of Pharmacy at The Ohio State University. His research focuses on the design and development of biotechnology platforms for the treatment of genetic disorders, infectious diseases, and cancers. Dr. Dong has authored over fifty papers and patents. Several of his inventions have been licensed and are currently under development as drug candidates for clinical trials. He is the recipient of numerous honors, including Early Career Investigator Award from the Bayer Hemophilia Awards Program, Research Awards from the National PKU Alliance, New Investigator Grant from the AAPS Foundation, Maximizing Investigators’ Research Award from the National Institute of General Medical Sciences (NIGMS), and 2017 Ohio State Early Career Innovator of the Year.
Yizhou Dong received his B.S. from Peking University, Health Science Center and M.S. from Shanghai Institute of Organic Chemistry. In 2009, he received his Ph.D. degree in pharmaceutical sciences from the University of North Carolina at Chapel Hill under the supervision of Professor K.-H. Lee. From 2010 to 2014, he was a postdoctoral fellow in the laboratory of Professors Robert Langer and Daniel Anderson at MIT.