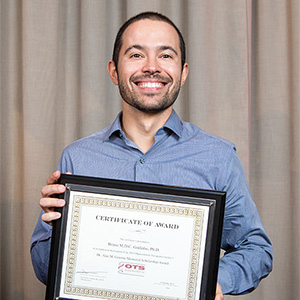 RNA Therapeutics Institute, UMass Medical School Biography: Bruno Godinho received his PhD in Pharmacy from University College Cork (Ireland) in 2014, where he studied formulation-based approaches for siRNA delivery to the central nervous system (CNS). His work from graduate school demonstrated that modified cyclodextrins can efficiently deliver oligonucleotides to specific regions of the brain, without major toxicity, and improve symptoms of disease in animal models of Huntington’s Disease (HD). In recognition of his graduate research achievements he was awarded a Silver Medal by the Instituto Politécnico de Lisboa (IPL, Portugal). To further pursue his interest in therapeutic oligonucleotides, he joined Prof. Anastasia Khvorova’s laboratory as a postdoctoral scientist in the RNA Therapeutics Institute at the University of Massachusetts Medical School. There he made major contributions to the identification of a novel neuroactive divalent siRNA scaffold that enables unparalleled distribution to the deep structures of the brain and sustained silencing of CNS gene targets (e.g. HTT), without the need for synthetic formulation. His postdoctoral work has furthered the understanding of the PK/PD relationships of conjugated therapeutic oligonucleotides in the CNS, and also when systemically administered. In 2016, he received the Milton-Safenowitz Post-Doctoral Fellowship Award from the Amyotrophic Lateral Sclerosis Association (ALSA) to support his research in ALS. While a postdoc, Bruno also acted as an Invited Adjunct Professor at Escola Superior de Tecnologia da Saúde de Lisboa, teaching pharmacy-related subjects and other advanced courses. Bruno is scientifically committed to helping advance novel oligonucleotide-based modalities so that they become a therapeutic reality for neurodegenerative disorders.