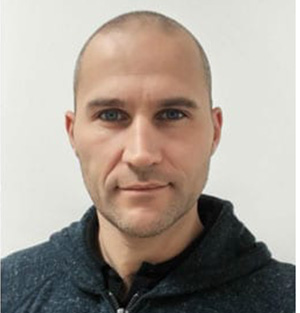 During my PhD studies at the University of Southern Denmark, Odense, I was introduced to most aspects of RNA biology. I spent most of the time studying a small non-coding RNA – so-called Spot 42 RNA. We discovered that it was a transacting antisense RNA that with help from a protein partner could bind to the ribosome binding site on a target mRNA to thereby block translation of the mRNA. Surprisingly, it could regulate multiple different mRNAs and other small RNAs were soon shown to function in a similar way.

After finishing my PhD studies, I joined Nuevolution, a biotech start-up that had been founded by former members of the lab in Odense. This triggered my interest in biotech and therapeutics. Thus, I later founded Hyscite Discovery based on a method of screening DNA-encoded libraries for the identification of therapeutic candidates. Hyscite ran out of funding in 2005, where after I took a job as patent attorney.

While working as patent attorney, I attended a conference where there was a lot of focus on siRNA and microRNA. Shortly, after the conference, I thought about using oligonucleotides as a steric block to prevent microRNA from binding to mRNA – probably inspired by the way Spot 42 RNA acts as a steric block to prevent ribosome binding to mRNA. In late 2006, I filed a patent application to the invention and in 2009, Mirrx Therapeutics was founded to commercialize the invention. Unfortunately, the company became entangled in a law suit that kept us busy for nearly 7 years, but we finally won in the Danish Supreme Court in the summer of 2015 and have now restarted the company.

The scientific environment in the microbiology lab where I did my masters and PhD studies was in general very stimulating, but my two supervisors during my masters and Phd studies, respectively professor Kenn Gerdes and Poul Valentin Hansen, were of course particular important. Another important person was a fellow student, Thomas Franch, who is now CSO at Nuevolution. He was a few years ahead of me, when I joined the microbiology lab and during my first years in the lab, he was in invaluable help. We became partners in crime spending countless hours in the lab doing science and discussing science.

I cannot remember when I first heard of OTS, but with an interest in therapeutic oligonucleotides, it seems you inevitably end up at OTS.

I need to stay updated on what is going on in the oligonucleotide therapeutics space and the OTS is a great place to do that.

I guess one thing that has differed, is how I get my ideas and what I do with my ideas. One example is the technology on which Mirrx Therapeutics was founded. The idea seems simple now, and I am sure that others had the same idea at the time. But to convert the idea to an invention with all its uses and embodiments back in 2006 wasn’t that simple. And I did not have any data to rely on, so I had to use data and knowledge from related fields to describe the invention. The same was the case for the invention on which I founded Hyscite Discovery. Here I also filed a patent application based on a lot of brain gymnastics, and it turned out that the technology worked.

Whatever free time I have, I spend with my wife and three kids of 6, 8 and 11 years. There is nothing better than having kids and I think that feeling is programmed into our DNA. My wife and I met at university, and we have many overlapping interests, especially in science and technology. Apart from work related stuff, I do not read much. Occasionally, I will dig into some subject of interest. It has often been related to physics, but currently I am trying to understand world war 2.

My unrivalled favorite interest is motorcycle racing. My garage is full of motorbikes and my wife and kids also race motorbikes. I also organize motorcycle racing myself, because otherwise there would have been too few possibilities of racing in Denmark. I even have a 10-meter truck to transport the motorbikes to the tracks, because they do not fit into a regular van. Isn’t it dangerous? Yes, it can be, but without it, I would have been at least 10 years older and I guess that can be dangerous too.