The Personal Journey of Stanley Crooke, the Creation and Development of Ionis, and Beyond 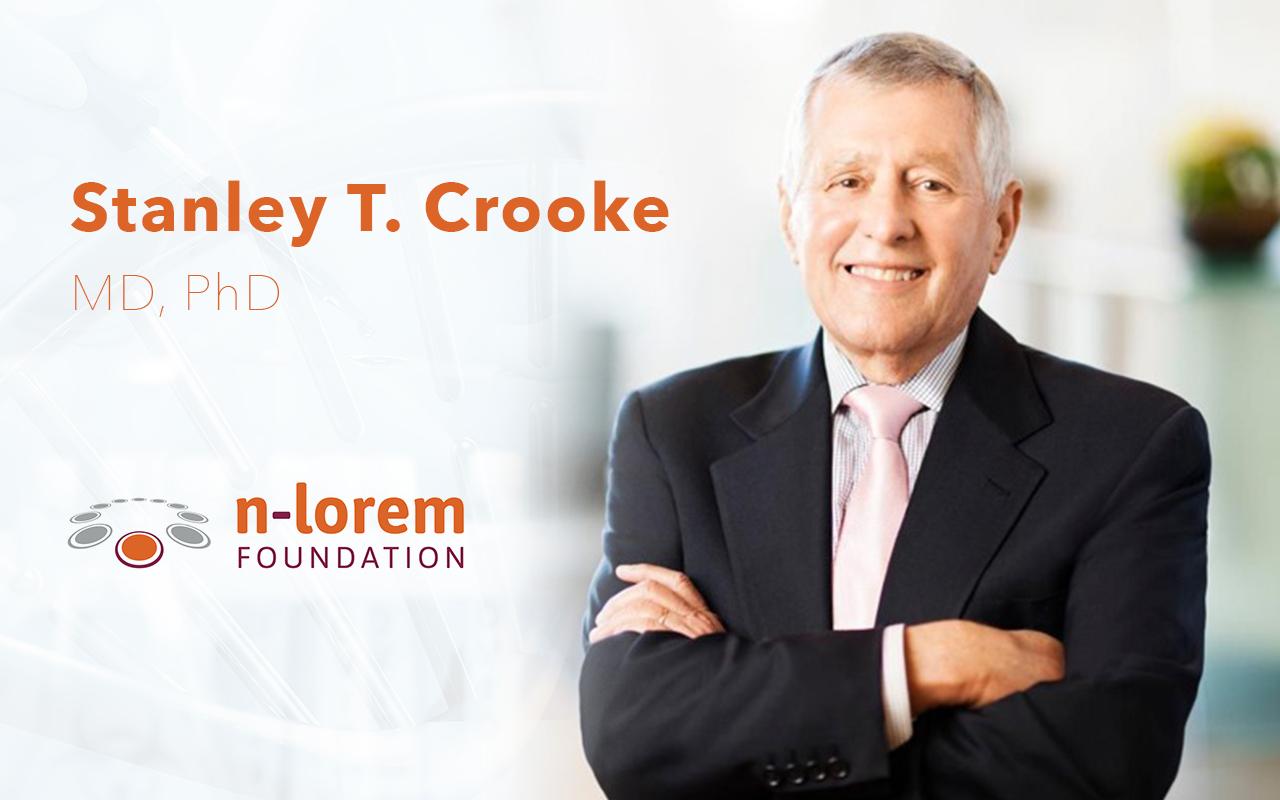 After stepping down last year as the company’s CEO, Crooke recently published a perspective of his journey in creating Ionis. But to understand what drove Crooke to doggedly pursue his mission of creating one of the top antisense drug companies, it’s helpful to understand his life.

Growing up: Overachieving and constantly in trouble

Stanley Crooke grew up destitute in the working-class neighborhood of Terrace Avenue, Indianapolis, in the ’40s and ’50s. After giving birth to Crooke at 15 years old, his mother left him with his grandmother and great-grandmother, who were living in a tar paper shack alongside a railway line in Southwest Indianapolis. When he was one, they moved to a 500-square-foot shotgun house with a toilet but no tub and where he slept on the floor with his two cousins. No one expected kids in Terrace Avenue to go to college or amount to anything.

“Poverty is not the loss of money — though, of course, that’s sad. It’s the loss of dreams; it’s the absence of hope. That’s poverty,” Crooke said.

The little house held little happiness, and when he turned five, his mother returned, newly married and carrying the last name Crooke. Crooke describes his stepfather as a “really good guy,” a hard-working mechanic with two jobs. His mother was an addict and visibly unhappy with her life.

“The earliest memory I have, at home, with her, was the first bath she gave me. She had these long red fingernails, and she was cleaning my hair, ostensibly. And my scalp started bleeding, and I watched blood in the water. I mean, that’s a bad memory,” he said.

Despite the lack of literature in his house and never going to kindergarten, Crooke picked up scraps of comic books from the streets and teach himself to read. Crooke says his childhood was rough, and he was constantly in trouble. Naturally intelligent, he was moved up a grade, then in grade four, he was placed with the advanced kids. But this opportunity was squandered when he was thrown out of the class for his behavior.

When he was around 8 or 10 years old, he started a seven days a week morning paper route. His earnings would go to his mother to help pay for her rheumatoid arthritis medication. Crooke was always tired, but he developed a work ethic he’d use for the rest of his life.

Meeting his mentor and finding his passion for RNA

Despite many factors working against him, he was the first in his family to finish high school. He went on to college, where he studied pharmacy, and afterward did a short, one-week stint in law school before dropping out and ultimately ending up at Baylor College of Medicine in the pharmacology MD-PhD program. During this time, he met Harris Busch, a biochemist whose intensity matched his own. Busch, who became Crooke’s graduate advisor, was known for his volatile temper that frightened most students, but not Crooke.

“People were terrified of him. You know, I was born looking for a fight, so Harris and I just hit it off, you know. Years later, I asked Harris why in the world he took me. And he said, ‘I thought you were really smart, and I’d never seen anyone as angry as you.’”

Busch became one of the most integral relationships in Crooke’s life and was the closest thing to a father figure he had. It was under Busch’s guidance that he discovered his love for science and lifelong interest in RNA.

“He helped me to focus my intensity on things that would matter to me for the rest of my life. And he also helped me understand my weaknesses through his weaknesses,” he said.

After furthering oncology research at Bristol Laboratories, Crooke was hired at SmithKline, now known as GlaxoSmithKline. While there, he became disillusioned with the pharmaceutical industry’s model, observing that binding research to a commercial operation hurt innovation.

Founding a company and facing failure

Crooke opened Isis Pharmaceuticals — now called Ionis — in 1989. The technology for turning oligonucleotides into drugs was still in its infancy, and although few people understood the difficulty of doing this, the excitement at the prospect was palpable.

Soon, the enthusiasm for antisense disappeared, replaced with skepticism that it was possible. Academic research on the topic was discredited, accompanied by “severe backlash” when people realized the early papers were incorrect, said Karl-Heinz Altmann, who led chemistry at Ciba-Geigy during the Ionis collaboration.

Crooke was criticized for exaggerating the capabilities of antisense while minimizing its limitations. The souring attitude toward antisense drew the research team at Ionis closer, and they became more determined, united by the scientific community’s dismissal of their work.

Crooke recalled the struggle to publish their research when the title had the word ‘antisense.’ But he reflects that although earlier papers were “diametrically opposite” to the conclusions of reports he later published, they didn’t reflect inadequate or incompetent science but the best scientific method practice (1).

A wave of scientific disappointments didn’t help with Crooke’s pariah status. In 1999, a drug that Ionis developed for Crohn’s disease, a severe intestinal disorder, failed to outperform a sugar pill in a test with 300 patients. Within days, Ionis’s shares fell, and Crooke had to lay off 40% of his employees.

“Many investors were very critical and didn’t believe that we had made progress and that there was evidence that antisense was working. And so we were all very defensive,” he said.

In his recent paper, Crooke articulated that creating and advancing a new drug technology required consistent commitment to innovation and innovators, investment in research, and perseverance through many challenges, disappointments, failures, and outright mistakes (1).

“Ionis certainly experienced all those types of events. To persevere, our mission needed to be compelling and clearly articulated, the culture coherent and cohesive,” he said, adding that if the culture were not strong, Ionis would have failed or given up long before it could make RNA-targeted drugs (1).

“Sick people need us:” success and creating a culture of innovation

By the early 2000s, Crooke accepted that his company would survive; Ionis’s second-generation antisense drugs had made their way to the clinic. It became clear to him that although having a common enemy brought the team together, it would ultimately become detrimental. Crooke wanted the internal culture to be less defensive. The doubters had disappeared, and it was time the company reflected this.

“The first line in our culture statement is one I have thought about on most days of my career: ‘sick people depend on us.’ That simple statement is an extraordinary motivator when coupled to a demanding culture committed to innovation and the practice of rigorous scientific inquiry and the growth of every individual in the organization,” he said.

Brett Monia, Ionis’ chief operating officer and new CEO, said that although Crooke challenges his employees at every turn, he also considers them family. “You can have knock-down, drag-out arguments about the science,” he said, “but he’s always got your back.”

Crooke said he aspired to create an environment where every staff member, from finance to human resources, saw their jobs as critical in supporting innovation and creating better patient treatments (1). He accomplished this culture via several approaches.

First, he encouraged his scientists to publish their research efforts to avoid obsolesce and establish peer recognition. Second, he created a human resource and administrative system that supported and rewarded innovation and innovators, noting that administrators came to treasure their role in helping scientists advance their work. Third, he cultivated a culture with a high failure tolerance but zero patience for poor performance (1).

“Failure is a part of the everyday life of scientists and a given for those engaged in drug discovery and development. Nevertheless, scientists must take risks if science is to advance,” he said.

At Ionis, when a team performed well, even if the drug or project failed, Crooke always started by congratulating them on their performance. However, he had no leeway for sloppy science and poor performance, which he dealt with aggressively. Crooke also worked to maximize transparency through committee meetings open to any person in the company, academic collaborators, consultants, and industry partners (1).

Spinraza: providing hope for the vulnerable

In 2016, the FDA approved Spinraza, the first spinal muscular atrophy (SMA) treatment. The success was not only a victory for Ionis and antisense technology but for the infants and toddlers suffering from the rare and lethal disease.

“If I had done nothing in my career but Spinraza, that would be enough,” Crooke said.

The decision to go forward with human studies for the drug was not easy; It involved dosing babies with a drug that would reach their brains and spinal cord through an injection into the spinal canal. Although the infants in the trial were only known to the company as a number, Crooke assigned each one a name and checked on them daily.

“We had never dosed a baby. Never dosed a child. Never given anyone intrathecal doses. And we were going into babies who were dying,” Crooke said. “I was terrified.”

The drug was a success, improving the babies’ motor function. The scientists behind Spinraza — C. Frank Bennett and Adrian Krainer — later won the Breakthrough Prize of $3 million for their work.

Now, with over 40 drugs in the Ionis pipeline designed to treat various diseases, including cancer, cardiovascular, neurological, infectious, and pulmonary conditions, the company no longer has to prove itself. A cardiovascular treatment that blocks the production of a protein involved in lipid metabolism and therapy for a rare disease are among the existing projects.

After facing intense backlash, the oligonucleotide field is thriving, with several biotech companies pursuing antisense technology and embracing the idea that it may be the cure for several rare diseases. Oligonucleotide drugs for conditions like Duchenne muscular dystrophy created by Toshifumi Yokota, and a drug for  Dravet syndrome by Stoke Therapeutics, give hope to those suffering from rare conditions. Additionally, Biogen and Ionis announced promising results for an Amyotrophic lateral sclerosis (ALS) treatment in March.

Crooke established Ionis to achieve the mission of inventing and advancing a new drug discovery platform; through disappointments and failures, his pursuit of this goal never wavered, and through establishing a culture that rewarded hard work and transparency, he did achieve his goal.

The statement’ sick people depend on us was a powerful motivator that Crooke used every day to demand more from himself and his employees. It’s a statement he continues to follow in retirement with the founding of his non-profit organization, the n-Lorem Foundation, whose mission is to create experimental antisense oligonucleotide treatments for patients with diseases caused by rare mutations. Not only are these treatments free, but they are also for life.