The idea that the stereochemistry of the phosphorothioate backbone modifications may influence the pharmacological properties of therapeutic oligonucleotides is not a new concept but has regained attention due to improvements in the synthesis of stereo-selective oligonucleotides1.

Several recent papers have investigated this idea in antisense2, immunomodulatory3 and splice-switching oligonucleotides4 as well as siRNAs5. In general, the conclusion from these studies has been that even with these improvements in the chemical synthesis of stereoselective oligonucleotides the associated increased cost and complexity outweighed the small increases in potency that could be shown for some of the chirally defined oligonucleotides.

Now, Iwamoto and colleagues6 from WAVE Life Sciences report on a simplified chemical synthesis of stereo-controlled oligonucleotides which they call SOSICS (stereo-controlled oligonucleotide synthesis with iterative capping and sulfurization). This method is an enhancement of Prof. Wada’s earlier work1 using monomeric nucleoside 3′-oxazaphospholidines. It solves the problem of releasing the chiral auxiliary group required to control the S or R conformation of the phosphorothioate (Sp and Rp) while still retaining the ability to cap truncated sequences to allow purification of the full-length oligonucleotide from n-1 synthesis products. Stereoselectivity of resulting oligonucleotides was greater than 99% with high coupling efficiency even when synthesising antisense oligonucleotides (ASOs) bearing 2′-O-methoxyethyl (MOE)-modified nucleotides at each end. However, yields of the final single isomer PS ASOs after HPLC purification were 4-6% which is lower than the 6-8% reported by Wan et al.2

To investigate the influence of the stereochemistry of phosphorothioate modifications on the pharmacological properties of oligonucleotides, Iwamoto and colleagues6 generated a panel of chirally defined ASOs with the same sequence as mipomersen (a commercially available apolipoprotein B100 ASO for the treatment of familial hypercholesterolemia). Among the tested designs are WV-5 which contains three 3′-SpSpRp-5′ (SSR) motifs in the gap region with all Rp linkages in the wings, and WV-6 which is a mirror image of WV-5 (RpRpSp motifs in the gap and all Sp in the wings). These particular configurations are based on the theory that RNase H1 may contact the prochiral non-bridging phosphate oxygens in a stereo-chemically differentiated manner which might result in advantageous properties for ASOs containing these motifs, though no molecular modelling data is provided to support this concept. 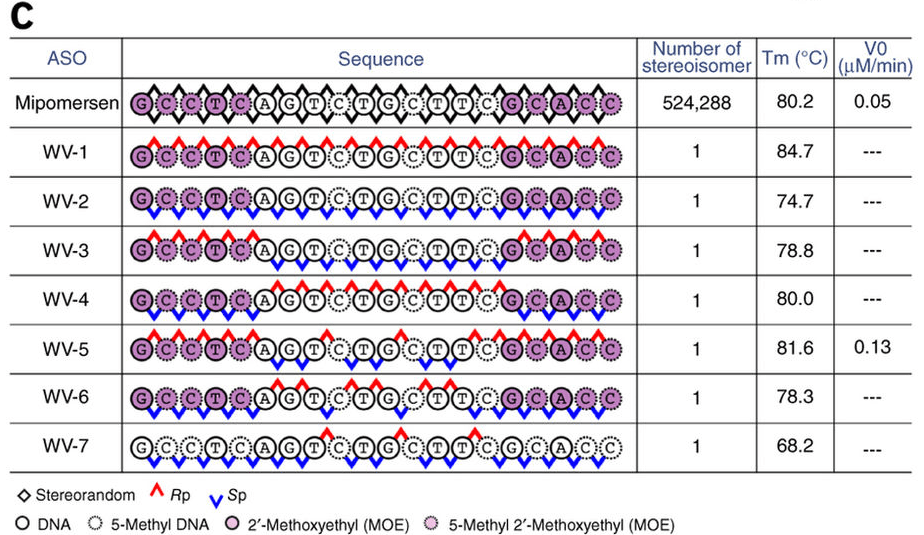 Consistent with prior reports2, Iwamoto et al.6 found that Rp increased the thermal stability of the ASOs compared to Sp stereoisomers but only to a small degree. All stereo-selective designs displayed a much clearer defined lipophilic and ionic character than the stereo-random mipomersen control. For example, WV-1 and WV-5 (pure Rp and majority Rp) eluted quicker than mipomersen on reverse phase and ion-exchange HPLC while WV-2 and WV-6 (pure Sp and majority Sp) eluted later. However, no data is presented on what practical use these differences have.

When testing the metabolic stability in rat liver homogenate and rat serum, WV-5 clearly outperformed WV-1 and mipomersen. Curiously, WV-7, a design identical to WV-5 but lacking the MOE modifications in the wings, performed as well as WV-5. These results suggest that even a few Sp linkages in the gap region can significantly increase oligonucleotide stability, that Sp linkages in the wings may be as stabilizing as MOE modifications and that adding Sp linkages to MOE modifications in the wings does not increase stability. WV-5 and WV-7 were also significantly more active than mipomersen in an in vitro RNase HC ASO–RNA heteroduplex assay measuring the remaining mRNA substrate (p ≤ 0.0001, n=3). Moreover, an ASO targeting human FOXO1 mRNA with a design analogous to WV-7 (SSR in gap, no MOE in the wings) was more active in this assay than stereo-random parental designs with or without MOE in the wings. Thus, the SSR motif seems to promote RNase HC activity at least in vitro.

Curiously, dose response curves in HepB3 cells resulted in an IC50 of 1.96 nM for WV-5 compared to 0.71 nM for mipomersen, while data for WV-7 was not presented. The best ASO in this assay was WV-6 (Sp and MOE in the wings, with RRS motifs in gap), an ASO less stable than mipomersen and promoting RNase HC activity somewhat more than mipomersen but not as well as WV-5. When human APOB transgenic mice were treated with eight intraperitoneal doses of WV-5, WV-6 or mipomersen at 10 mg/kg twice weekly, all ASOs initially resulted in ~70% downregulation of APOB100 serum levels. Serum levels in WV-6 and mipomersen treated animals started to recover at 39 and 45 days (~50% and 65%) while in the WV-5 treatment group they remained 70% reduced (n=4, p ≤ 0.0001). Levels of APOB mRNA in liver confirmed these results.

These results would suggest that WV-5 persists longer in the liver, which would be congruent with the in vitro stability data. However, there was no difference in the concentration of remaining ASOs at 24 or 45 days. The authors also present data suggesting extended activity for a GalNAc-conjugated ASO targeting APOC3 with a WV-5 equivalent design after three injections at 5 mg/kg. However, no indication of significance is given in the text and error bars for this experiment are shown as SEM with the gap between the SEM error bars not large enough to suggest significance7. Again, there were no differences in liver ASO concentration at 78 days compared to the stereorandom parental ASO in this experiment.

Iwamoto et al.6 offer no explanation for these incongruent results on the potency of the SSR motif. Still, there may be some advantage to the use of stereo-defined oligonucleotides. In a recent review, Hagedorn and colleagues8 from Roche Innovation Centre present data showing differential efficacy of stereo-select ASOs bearing LNA modifications. In their in vivo study, stereo-select ASOs resulted in different oligonucleotide concentrations and remaining mRNA levels in the liver, suggesting that there are distinct efficacy profiles associated with defined isomers. It is not clear if these efficacy increases offset the additional costs of chirally defined oligonucleotide synthesis when taking the improvements reported by Iwamoto et al.6 into account.

This is certainly a hot area of research for oligonucleotide chemists and such improvements in the chemical synthesis of chirally defined oligonucleotides should enable more in-depth studies to clarify these questions. In the meantime, WAVE Lifesciences have initiated clinical trials of their stereo-defined oligonucleotides in both Huntington’s disease (allele-specific ASO) and Duchenne Muscular Dystrophy (exon skipping). First clinical results are expected by the end of 2018.9

This site uses Akismet to reduce spam. Learn how your comment data is processed.