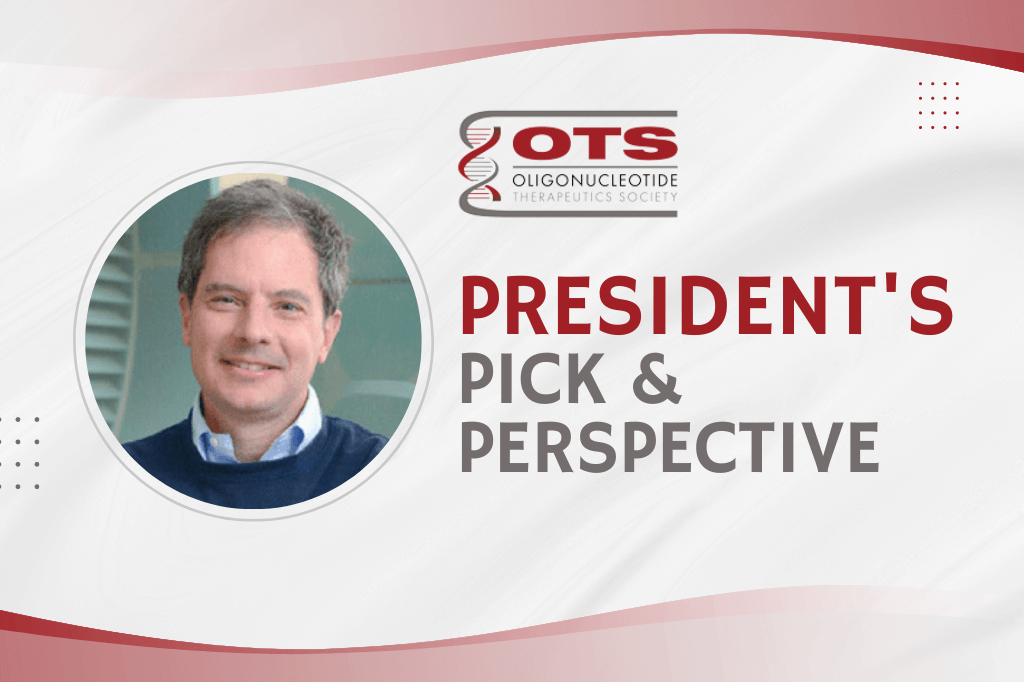 Successful nucleic acid therapeutic projects have one thing in common – rigor. Lack of controls has many consequences ranging from failed companies, seminars that waste the time of all involved, and lost hopes of patients. In this “President’s Pick”, Past President Annemieke Aartsma-Rus lays out a passionate plea for the inclusion of basic, long-established controls in all experiments.

Past President’s paper pick – the guidelines for using control oligonucleotides in experiments and why EVERYONE should use them!

This blog’s pick is about something that comes up regularly at oligonucleotide meetings when results are presented using ‘untreated’ or ‘saline’ as a control. Those who have attended past meetings of the society will know these presentations trigger two past Presidents (Art Krieg and yours truly) into preaching about the importance of using controls, and the current president (David Corey) to write the selected paper.

Why are we triggered so much by researchers not using control oligonucleotides?

Some historical context: when the Oligonucleotide Therapeutics Society was conceived the field had a bad reputation. Back then most oligonucleotides had a phosphorothioate (PS) backbone, but it was not known that this also induced unintended effects. Lacking control oligonucleotides in vitro experiments showed reduced expression levels of target genes, which were not due to a targeted effect but rather due to reduced cell viability. (Note that housekeeping genes are often the last to be affected by this as they play such crucial roles in cell metabolism.) In vivo experiments revealed shrinking of tumors, not because the target gene was down regulated, but because an inflammatory response was triggered due to activation of the toll-like receptor 9 pathway.

You may be thinking ‘but as long as the intended effect is achieved, who cares?’ It is probably clear that reduced cell viability has limited clinical translatability. Triggering the immune response, however, can be therapeutic for tumors and is also something that is being exploited, e.g. by Checkmate Therapeutics. However, you want this to be achieved on your terms rather than having an uncontrolled immune response. Furthermore, motifs that induce these effects can differ between species, so the applicability may be limited in humans when you detect this in a mouse or rat model.

An often-heard comment is that some controls give ‘really weird results’. Anyone who is in the field long enough will have had such an experience. Obviously, these misbehaving oligonucleotides are not proper controls and should be avoided and replaced by another control. Ideally, the field sets up a database of oligonucleotides that have shown to ‘behave’ and ‘misbehave’ in a specific context (tissue, modifications, etc.), so we facilitate selection of proper controls.

Another often heard control that I personally do not find acceptable, is the ‘vehicle only control’. Note that when you complex your oligonucleotides the uncomplexed vehicle is a different beast from the oligonucleotide vehicle complex. To use a comparison to make this more concrete, if your complexed compound is a cupboard with clothes,  you assume the Ikea box with the unassembled components is a control for the cupboard.

I understand taking along controls is expensive – especially for in vivo experiments. However, drawing the wrong conclusions from an experiment is even more expensive in the end. We should not forget that we are in the field of therapy development and we have a responsibility toward the patients for whom we develop treatments. When we draw the wrong conclusions, we not only waste money and our own time, but also theirs.