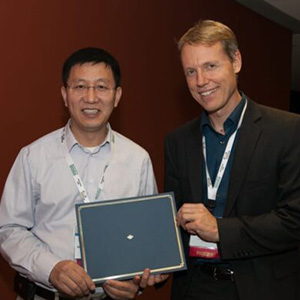 Biography: Xianbin Yang, bioorganic chemist, graduated from the School of Pharmaceutical Sciences, Beijing Medical University in 1988. Xianbin obtained his Master of Medicine at Beijing Medical University in 1995 and his Ph.D in 1998, after which he became a postdoctoral fellow at the University of Texas Medical Branch (UTMB) in Galveston, Texas, USA. In 2004, Xianbin became a faculty member in the Department of Biochemistry and Molecular Biology at UTMB. He then transitioned to Director of Research and Development at AM Biotechnologies in 2007. He became an adjunct faculty at the University of Houston at Clear Lake in 2008. Xianbin also recently obtained an MBA from the University of Houston at Clear Lake, Texas, USA. Xianbin was the recipient of two awarded and 5 pending patents and the recipient of the James W. McLaughlin Award for Research Excellence in Infection and Immunity at UTMB in 2003. He was the PI for 10 highly competitive awarded grants including one from the UTMB Cancer Research Center, one from the Mike Hogg Foundation, six from National Institute of Health, and two from the National Aeronautics and Space Administration (NASA). In addition, he was awarded two selective fellowships to attend the First and Second Meetings of the Oligonucleotide Therapeutics Society in New York in 2005 and 2006, respectively. Xianbin is author or co-author of more than 53 publications and two book chapters.